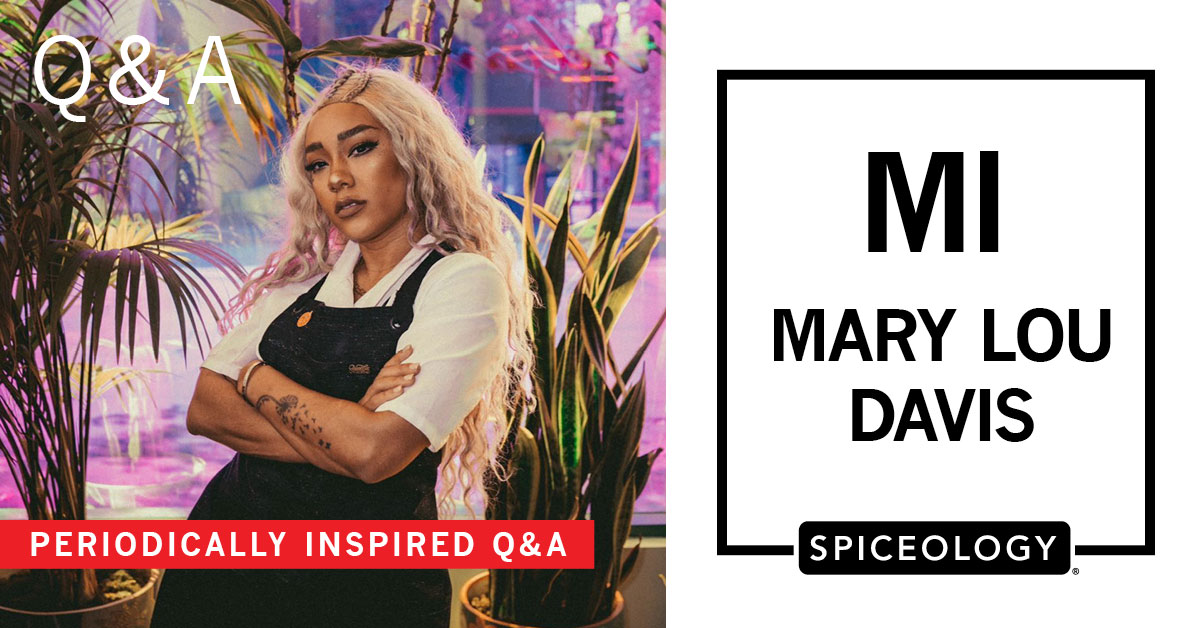 What do you get when you mix cosplay and cooking? Cosplating - the trend you never knew you needed in your life that’s being led by the petite powerhouse that is Chef Mary Lou Davis.

You might recognize her as the Runner Up on Season 19 of Hell’s Kitchen, from her cult-fan following Instagram account @geeksandgrubs, or from culinary pop-ups across the country.

We caught up with her and talked about her recent move from Texas to the Bay Area, where she finds inspirations, her experience in the kitchen, and a whole lot more - read the full interview and get to know Chef Mary Lou below:

When did you first find a love of cooking?

“When I was 8 or 9. No shade to my Mom, but I was raised by TV. Tuesdays were her late shift, so that was the one day I was allowed to use the microwave. It just started from there.

It was so much fun cooking with my Mom. She was so tired, but we’d still cook together. We’d make a creamy piccata shrimp with angel hair pasta; I’ve been trying to recreate that dish lately. But it’s never going to be as good as it is in my memory. It’s more of a feeling I had, that pasta made me so happy. Just little Mary in the kitchen, happy as a clam.”

Talk to me about some of the challenges you’ve faced in your career.

“Being a woman in the kitchen, the higher in ranks I got, the more I noticed that I’m a woman. I felt more disconnected. I would somehow be seen as less, but I work twice as hard because I specifically don't want to be seen as less than.

That also extended to how I present myself; I wouldn't wear any makeup with a baggier outfit. I once asked a chef who I worked for why he hired me and he said, “you’re pretty.” I don't ever want to get a job based on how I look. On the flip side, during practicals, I would do my makeup because that helps make me feel confident. It doesn’t mean I’m dressing up for anyone else.

On social media, I get worried about how I’m perceived by other chefs I look up to. Yeah, I’m doing “silly” food and I’m dressed up in my cosplay, but I don't want to be seen as childish. When I was on my season of Hell’s Kitchen, I wanted to make it clear that I’m not just a gimmick.”

People around you, music, books, travel - where do you find inspiration when you create new dishes?

“I find inspiration from everywhere. By what's around me, talking to family, my Auntie’s old recipes. But it sucks because a lot of chefs use their phone when they get inspired, but if I type something up I’ll get distracted by something else on my phone and lose the idea. So I’m old school - I use my black warrior pen and write down my ideas.

The chefs around me now, one single thing can spark an idea. Maybe I like your ocra, okay now I’m playing with ocra and maybe making a powder and thinking ‘what can I do with ocra slime?’ I grew up on Nickelodeon slime.

I can also get stuck sometimes, and when that happens I’ll talk with someone who is not a chef, like my friend Jenna.”

“I wish that I was one of those chefs who drew out their plating, but usually it’s just me thinking with my headphones in. Us chefs, we need noise, and I start letting my mind wander about what the dish will be like.

I’ll make the dish and then do it again later. There’s trial and error and you just keep going - when you make the mistakes it’s the best, the dish gets better.”

How do you approach plating a dish? Do you consider plating an art?

“Plating is an art form, and man, I struggle with it. I see it and it’s gorgeous in my head and then it never comes out the way I want it. I’ll work directly with other chefs on how they plate. And I’ll think ‘how would this naturally lay?’ But I always want it to be whimsy.

I do practice plating - especially for my social media videos. Trust me, there are plenty of videos I didn't show since the plating didn't look right. Sometimes I do sketch and I’ve been getting better - especially after moving to California. It’s way different here than San Antonio - plating and presentation is way more important here.”

If you could design a menu for any fandom, what would it be?

“Lord of the Rings, but I’d add more whimsy. That could be an amazing food or pop-up series - Orc Day would be funny (laughs). I’d have too much fun with it - I could do it as a whole immersive experience where you go to a new place in Middle-Earth each month.”

You’re a recent transplant from Texas to the Bay Area - what are some culinary differences you’ve noticed?

“There is a big pop-up event scene here, and they just don't do a lot of those in Texas. There are also more independently owned restaurants here in the Bay Area.

I don’t know, there’s just a different swagger in the Bay, people are very carefree with a slower pace of life. I feel like people are outside here all the time - it blows my mind. I remember seeing a commercial for Visit California while I was in Texas and people were all smiling and hiking - and they actually DO hike all the time, people ARE just chilling by the lake. It’s wild.”

What advice would you give a chef still in culinary school?

“Continue to ask questions and never compare yourself to anyone's resume. Go out and stage with other chefs in their kitchens as much as possible. You might like or love food, but do you want to actually work in the kitchen and grow your business? If yes, then stay in culinary school.”

What’s a spice you consider under-valued?

“Cumin - its the sexiest spice. And coriander - they just belong together, and together they make magic. There’s so much more out there than just salt and pepper, and cumin is not used enough. I challenge people to learn how to manipulate flavors with spices and elevate their food.”

What do you think a chef’s role is in their local community?

“A chef’s responsibility is to educate the people around you and lead by example. Chefs in the Bay Area pay more attention to their surroundings, so I’d say supporting and using the local bounty. Cooking sustainably and farm-to-table menus and supporting local farmers.”

Favorite dish to cook for yourself?

“I make a lot of pastas: cacio e pepe spaghetti - or pasta with olive oil, anchovies and capers. I’ll sit there on the floor and eat pasta and I’m content.”

Favorite dish to cook for friends and family?

“Comfort meals - my Mom always wants a steak or a crab boil. I love to cook coq a vin - I do a springtime version with polenta and I sear that chicken to get those crunches.”

What are your breakfast, lunch and dinner restaurant recs when in the East Bay?

“For breakfast head to Lulu in Berkeley - it’s Mediterranean and amazing. For lunch hit up Snail Bar in Oakland for some escargot - it’s a cute spot. For dinner, come visit me at Viridian for some small plates and cocktails.”